65daysofstatic are very pleased to reveal the first full track to be taken from their forthcoming album ‘Wild Light’ due out on 16th September. The full version of ‘Prisms’ is now available to stream via The Quietus, and you can check it out here – http://thequietus.com/articles/13141-65daysofstatic-prisms-video

The band had this to say about the track: “We’re delighted to issue the first audio analgesic from Wild Light into your ears! Prisms is the outcome of 65daysofstatic smashing itself into a million pieces and reassembling itself in the dark. We tried to write sad dance music to be danced to at the end of the world, a possibility that seems increasingly likely. Thanks for listening!”

‘Prisms’ is also available for free download from the following link – http://dropholic.com/prisms

Last week the band launched an interactive 3D remix project for the very same track, giving fans a chance to manipulate sections of the track themselves. Check it out and download it for PC, Mac & Linux here: http://www.65daysofstatic.com/prisms/

The album is also available to pre-order in all formats directly from the label at this location – http://www.insideoutshop.de/Artist/65daysofstatic/21200

During the past few weeks, 65daysofstatic have let loose several teasers into the world wide web revealing details on their forthcoming new album. That album is titled ‘Wild Light’ and is going to be released on the 16th September 2013. You can check out the fantastic artwork courtesy of Caspar Newbolt of Version Industries (Louis CK, Alessandro Cortini, Daft Punk, Big Black Delta), and the track-listing below: 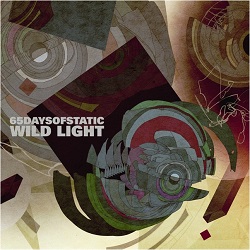 The three teaser trailers can be found below:

The band still has some festival appearances scheduled for this summer, as well as the already announced UK & European tour dates where Australian band Sleep-Makes-Waves and UK act The Physics House Band have been announced as support.  Dates can be found below: