Svarga Music presents “Epoch Of Aquarius” one of the best Pagan Folk Metal album ever released and surely a classic of Ukrainian scene. Released in 2006 and quietly sold out this masterpiece of Slavonic Pagan Art is now revived by the joint effort of Svarga Music (digiCD) and Gardarika Musikk (CD). Made by a legend of Ukrainian underground, Vladislav “Munruthel” Redkin, who participated in more than 30 albums with various bands like NOKTURNAL MORTUM, ASTROFAES, LUCIFUGUM, THUNDERKRAFT, this great album consisting of folkloristic colors, technical solos and live folk instruments makes glory and pride of Ukrainian Pagan Metal scene! Re-edition comes with new artwork and includes as bonus tracks cover versions of DEAD CAN DANCE’s “Black Sun” (CD) and BURZUM’s “Tomhet” (digiCD) and it is available for pre-order now at www.svarga.eu.
With this re-issue we want to bring the attention of worldwide metal fans to this outstanding album. If you haven’t heard about this album back in 2006 we strongly encourage you to do so now. Release date: August 6th, 2012.

Find here a teaser for the presentation of the album “Epoch Of Aquarius” and a song presented via Soundcloud. 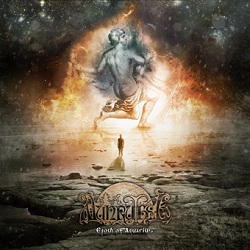 Here is also a preview of the cover and the complete tracklist: 1. On The Verge Of The Worlds (Prologue), 2. The Raven Croak, 3. In Leaves’ Whisper Or In Bursts Of The Thunder…, 4. Epoch Of Aquarius, 5. I Was Confided By Dawns…, 6. Echo Of The Forgotten Battles, 7. On The Verge Of The Worlds (Epilogue], 8. Black Sun (DEAD CAN DANCE cover, CD edition), Tomhet (BURZUM cover, digiCD edition)