Jersey death metal devils ABACINATE have burst back onto the scene after a year-long hiatus following the tragic death of singer Jason “Plunger” Sica. After securing the services of new vocalist Ruben Ratliff, of Jersey death/slam band NJDOTS, Abacinate closed out 2012 with a string of shows in New Jersey and Boston with the likes of Dehumanized, Dying Fetus, Dysentery, Malignancy, Without Remorse, and Cognitive.

With the band firing on all cylinders again and new material for the follow-up to 2011’s Genesis in the works, ABACINATE is pleased to announce their addition to the 2013 Philthadelphia Infest on March 16th and 17th. The fest will take place at Gunners Run – 1001 North 2nd Street, Philidelpdia, PA.  Appearing alongside ABACINATE will be MASTER, DEVOURMENT, CANNIBIS CORPSE, BRUTAL TRUTH, PHOBIA and many more. For details, visit the PHILTHADELPHIA INFEST Event Page. ABACINATE is scheduled to perform on Sunday, March 17th.

Stay tuned for ABACINATE updates and news, as 2013 promises to be a huge year for the band. www.facebook.com/abacinate. 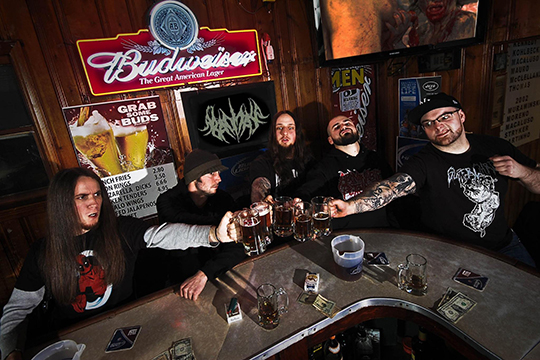 Faced with the same adversity and mediocrity that serve as antagonists in every metal kid’s personalized tale of scrounging for success in an over-saturated scene, Abacinate is one band you won’t catch high-fiving one another at the bottom rung of the ladder. From the band’s formation in early 2005, Abacinate has always strived to be more than just a big fish in their small, central Jersey pond.

While the last six years have been filled with an abundance of broken bodies, shattered bottles and moments of heinous debauchery, they have also seen Abacinate evolve from just another garage band to an impact player on today’s underground scene. Refusing to stand still or spin their wheels, Abacinate’s growth process can be easily traced from their early demos and split releases to the release of their full-length debut, Ruination; an album that Blabbermouth.net states “packs a lot of punch and keeps things interesting.”

It seems that the critics weren’t the only ones to take a liking to Abacinate’s seamless blend of brutality, melodic death, thrash and unadulterated heaviness, as they’ve shares stages with acts raging from the legendary Testament and Napalm Death to new-school warriors such as Job For A Cowboy, Suicide Silence and Necrophagist (just to name a few). The summer of 2010 saw Abacinate strike out on a DIY tour with fellow Jersey-natives Fit For An Autopsy, which earned both bands new fans across the country and served as one more notch in the proverbial bedpost. Before hitting the road, Abacinate entered The Machine Shop with producer Will Putney to record their anticipated second full-length, Genesis. A sonic slab of concrete and razor wire, Genesis offers as much chaotic brutality as it does schooled and focused songwriting. In short, this album offers the metal community a much needed kick to the cubes.

In September of 2010, Abacinate suffered the tragic loss of frontman Jason “Plunger” Sica. Once again, the band’s stop-at-nothing attitude prevailed and Genesis, and everything the band accomplishes after, will not only serve as a tribute to the singer’s life and memory, but as a testament to the strength and determination he shared with his bandmates. This is Abacinate. This is fucking metal.