Tomb of Feathers was already released worldwide on September 18 2012 by The Path Less Traveled Records in digital format, and on a limited edition cassette tape by the band itself in fall of 2012 through their own imprint, Anti-Everything Laboratories, Inc. Once again, as it was for the tape, all artwork and packaging layout for the CD was done by the band’s vocalist, Mattia Alagna.

Tomb of Feathers is now available in stores, online retailers, digital outlets and by visiting The Path Less Traveled Records’ webstore at tpltr.bigcartel.com. 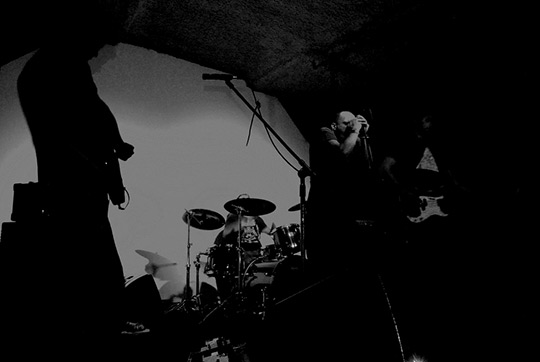 ABSTRACTER is the latest sonic monstrosity to emerge from the gutters of the San Francisco Bay Area’s enigmatic extreme music underground. Formed in 2010 and with virtually no prior experience in other bands or exposure of any kind, and with only a little over a year of writing experience under their belt, these four obscure slime mongers from Oakland have crafted a debut that is both mesmerizing in its seemingly effortless ability to construct massive and enveloping soundscapes, and annihilating in it’s brutal, relentless, and merciless sonic grasp on the listener’s synapses. With forty minutes of music divided solely among three tracks, this bile-drenched debut is clearly a vessel for music that has at it’s core the urge and primordial instinct to drag the listener into a vast, violent, and obscure world all of its own.

Written in 2011 over a span of just a few months, Tomb of Feathers displays ABSTRACTER’s unique sound and style of songwriting, influenced by bands like Amebix, Swans, Beherit, Godflesh, Disembowelment, and His Hero Is Gone, and shaped by elements borrowed from a vast array of genres, spanning from black metal, to crust and doom metal, to shoegazing and psychedelic rock, to hardcore punk and noise music. The work itself is a single-themed concept album about madness and mental disease as a result of the extreme and cynical individualism that permeates humanity.

Entirely self-produced and self-funded by the band Tomb of Feathers was recorded live in three days (one track per day), directly to 22 track – 2 inch analog tape mounted on 30 minute reels processed by a mid-80’s Akai tape recorder, by sound engineer Josh Garcia (Melvins, Dwarves). The recordings were then passed on to Greg Wilkinson (Brainoil, Lycus, Laudanum, High On Fire, Noothgrush, OM, Atriarch, Sleep, Worm Ouroboros, Vohl) at Hear Hammer Studios for mixing, and were then shipped to Philadelphia to be mastered by James Plotkin (ISIS, SUNN O))), OLD, Khanate, etc.).

Hot News: Abstracter’s “Tomb of Feathers” to be released on 12″ vinyl LP on April 15

Hot News: Abstracter Debut “Tomb of Feathers” To Be Released on CD This Summer

Hot News: Abstracter’s Tomb of Feathers to be Released 9/18/2012 on The Path Less Traveled Records