Loyal to the beastly sounds pioneered by their legendary countrymen in DISMEMBER and ENTOMBED, Swedish death metal act CORROSIVE CARCASS delivers raw and aggressive old-school death on their debut Composition of Flesh. On June 29th, Abyss Records will unleash said album as part of their Summer of Sickness 2012 campaign. Fans of chaotic OSDM are strongly urged to visit this location to check out selections from Composition of Flesh and then visit Abyss Record’s Webstore to order your copy. 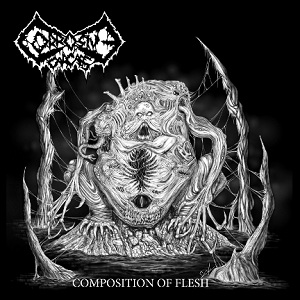 ORROSIVE CARCASS was founded by Markus Janis and Fredrik Lindorf sometime back in 2004 and soon after Peter Koistinaho and Fredrik’s brother Mikael Lindorf joined the band. They started to rehearse in Fredrik’s room in his parent’s house for the sole purpose of playing heavy music. As they became better musicians and delved into the more extreme side of metal, their vision of the band became more death-oriented. In 2007, Jonathan Sjöblom joined the band as a vocalist. Soon after, Fredrik left the band due to creative differences. Markus quickly put his guitar down to fill the empty drum throne and guitarist Robin Dahlberg stepped in. Robin did not play in the band for long, before leaving for personal reasons. In the autumn of 2009, Christian Kanto joined the band to replace Robin. With this line-up CORROSIVE CARCASS injected new life into the older material and began to write new material that soon would become the band’s first demo Rot.In.Pieces.

CORROSIVE CARCASS recently completed their debut full-length, Composition of Flesh, which is set for a Summer 2012 on Abyss Records.