Hardly any other band has influenced the Heavy Metal genre as much as German legends ACCEPT! Classics albums such as »Restless And Wild« (1982), »Balls To The Wall« (1983) and »Metal Heart« (1985), have inspired generations of new bands, and this has continued since their reunion in 2009. Both »Blood Of The Nations« (2010) and »Stalingrad« (2012) entered the charts globally ( #6 in Germany, #81 in the USA) and underline the premiere league status ACCEPT still have today.

Now ACCEPT announce the release of their new studio album: “Something happened to us, something subliminal and impetuous,” commented main composer Wolf Hoffmann. “It is wild and scary and it’s called »Blind Rage«!”

»Blind Rage«, just like its two predecessors has been produced, mixed and mastered by Andy Sneap. 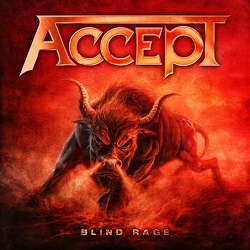 “The cover artwork done by Daniel Goldsworthy shows the beast coming over us – in blind rage – all over the planet. Wherever we go, whenever you turn on the TV – there is blind rage in the works – either natural catastrophes or man-made madness”, the axe man of ACCEPT states.