The Ruins of Edom is the title of the new split release between two of the heavily inspiring Occult Black Metal acts: ACHERONTAS from Grecce and NIGHTBRINEGR from the US.

The split is set to be released June 26th in Europe and August 16th in North America. 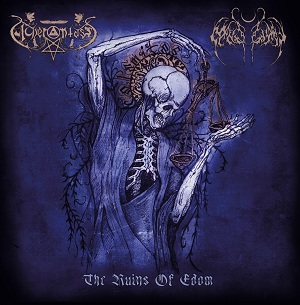 On The Ruins Of Edom both bands continue to travel the previously selected path of mystical elegance, presenting the specific, magical atmosphere and darksome melodies they’re are known for. At the same time the cooperation of the two outfits falls outside of the recording process.ACHERONTAS (and also Acrimonuis) members in the shape of Cain Letifer, Acherontas V.P.9 and C.Docre will empower NIGHTBRINEGRthrough handling guitars and drums as session musicians during band’s European tour. Furthermore, ACHERONTAS will join the tour for few selected dates, so far including:

The new split will be available as special & limited editions only, therefore we encourage enthusiasts of both bands to place their orders fast. The formats are as follows: limited to 1000 copies 3-panel digipack CD with 8 pages booklet and limited to 300 copies 12″ vinyl (250 black vinyls and 50 cyan blue vinyls available via Agonia Records Webstore exclusivelly).