This Summer, the world will experience the vicious death metal/deathcore of London-based abusers, ACRANIA, as the trio releases their debut full-length via California’s Unique Leader Records.

The politically charged ACRANIA has spread their message through several independent recordings since their 2012 inception. Their debut split with Blue Waffle and “A Trophy )f Corporate Disfigurement” single, both released in their first year as a band, followed by their The Beginning Of The End EP released last year have helped the band forge a devout fanbase of pit-seeking followers. Having already toured with various acts around Europe including Cerebral Bore and Warpath, and with upcoming shows booked alongside Thy Art Is Murder, Blood Red Throne and many more, ACRANIA will continue to devour their way through the scene and spread their message of unrelenting hostility through their blistering mix of brutality, slams and blastbeats.

Earlier this year, ACRANIA recorded their debut full-length, Totalitarian Dystopia, with Stu McKay at Studio 6 in London. Following a mixing/mastering job by Chris Foster and having artwork crafted by Par Olofsson, Totalitarian Dystopia boasts a thirty-six minute maelstrom of sonic devastation through ten new tales of pure intolerance for humankind’s downfalls. The record includes guest appearances from Tom Barber of Lorna Shore, Mendel of Aborted and Jamie Hanks of I Declare War, and promises to engulf an entire new legion of worldwide death fanatics upon its release on August 19th.

Stand by for audio samples and further info on Totalitarian Dystopia in the forthcoming weeks. 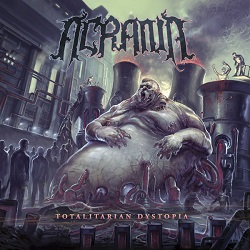