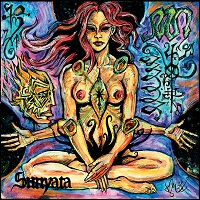 The Hollow Wedjat, the 5th track from ACRIMONIOUS‘s upcoming full-length album entitled Sunyata, is available for streaming at the following link:

Typhonian occult metallers ACRIMONIOUS return with with a new rock-influenced and ritual-driven black metal release, wrapped in a classic heavy metal feeling. Band’s second full-length album entitled Sunyata is due to be released on Agonia Records on the 28th November in Europe and 5th February in theUSA.

The album was recorded, mixed and mastered in Sitra Ahra and Unreal Studios with the assistance of Necromorbus Studio (Watain, Adorior, Ondskapt,Destroyer 666). It will be available as digital download, CD/LP with booklet and limited to 100 copies splatter vinyl with 20 page booklet including an A2 poster. The album can be pre-ordered at: http://agoniarecords.com/index.php?pos=shop