CAVITY RECORDS announces April 20th as the release date for a special split LP between ACROSS TUNDRAS and LARK’S TONGUE. Consisting of two absolutely epic songs from each American band, the ACROSS TUNDRAS/LARKS TONGUE split LP is the first collaboration between these two groups. ACROSS TUNDRAS was born on the Western High Prairie and has been sighted recently in the hills north of Nashville, TN. Countless mysterious audio artifacts and sonic expeditions have been made by the un-herd collective since their inception in 2003, both delighting and bewildering musical excavators who have encountered the aural, physical, and meta-evidence of this pastoral beast.Hailing from the Midwest, LARK’S TONGUE formed in 2010 of seasoned travelers informed by all manners of cosmic pursuits. They conjure heavy, layered psychedelia with an emphasis on harmony and narrative, atop beguiling squalls of guitar, shimmering keys, and a thick low-end. This split marks the coming-together of two bands with diﬀerent styles but similar influences, and will give the listener visions of Panoramic Country Crush, Cosmic Blues, Vintage Psychedelia, Terrestrial Drone, and Rural Heaviness. The priest dream is a siren song to suﬀer, illuminating the pathways where fear and bliss become one. What starts with pleasure endures in alarm, and only your eyes can look straight at the sun… 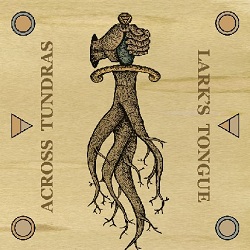 Begun in 2008, CAVITY RECORDS is an American-based record label specializing in various shades of metal, hardcore, and rock, with a special emphasis on luxurious vinyl releases. To date, CAVITY has put out releases by the likes of NORTH, ROSETTA, PAULSON, YEAR OF NO LIGHT, EAGLE SCOUT, GIANTS, NANDA DEVI, SAKES ALIVE, BACCHUS, and ADAI among others.

Hot News: Across Tundras To Release New LP On Band’s Own Label; Western US Tour Nears