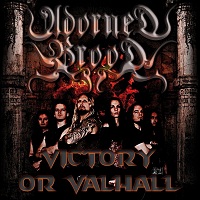 ADORNED BROOD are going to release their new album in late November!

The band has now uploaded a new studio trailer.

The second trailer features vocalist Frost and a short excerpt of the band’s new song “Victory Or Valhall“.

The song will also be the first digital single off the upcoming album.

You can watch the studio trailers here:

“Victory Or Valhall” is going to be available digital only and will be released on October 26th.

“Kuningaz“, ADORNED BROOD‘s new album, will be released on November 23, 2012 via Massacre Records.