Norwegian Dark Metallers AETERNUS are set to enter Bergen’s Conclave and Earshot Studios in June together with producer Bjornar E. Nilsen (VULTURE INDUSTRIES, BLACK HOLE GENERATOR) to begin recording the band’s seventh full length album. The album, to be titled “And the Seventh His Soul Detesteth”, will be released on Dark Essence Records later this year.

Formed in 1993 in Bergen, and with six full length albums under their belts, AETERNUS is one of the pioneers of what the band calls “Dark Metal”, meshing the sounds of Black Metal and Death Metal with superlative guitar playing and occasional haunting, melodic interludes. Of the original line up, only founder, guitarist and frontman Ares remains, but he has put together a new and formidable line up, bringing onboard drummer Phobos (GRAVDAL, GALAR, MALSAIN) and guitarist Specter (GRAVDAL, live session guitarist GALAR & VULTURE INDUSTRIES). Session live bass is handled by Skyggen (TORTORUM, live session guitarist GORGOROTH). The new lineup will hit the stage at the Hub and Heuy Metalfest at De Azijnfabriek in Roermond, Netherlands on the 19thMay, with an exclusive set showcasing tracks from AETERNUS’ first two albums “Beyond the Wandering Moon” and “And So the Night Became”. 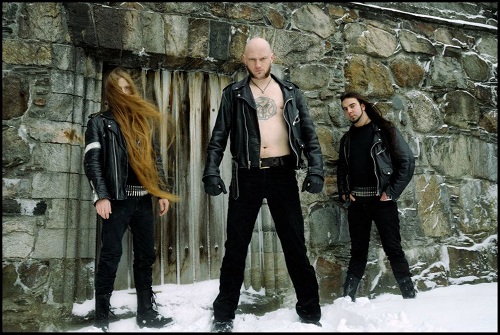 Commenting on the re-emergence of the band, seven years after the release of their last album “Hexaeon”, Ares said “Time seems to just pass by without you realising. Although AETERNUS hasn’t seemed to be very active recently, I have been writing and working on new material, and we have chosen ten tracks for the new album which we have been rehearsing ready for when we enter the studio. I’m not going to say much about them except that Phobos and Specter have brought their own approach to things without losing any of the heaviness, power and intensity that people have come to expect from AETERNUS. It’s a whole new era for the band, and we can’t wait to get going”. More information about AETERNUS can be found on the band’s Facebook page at http://www.facebook.com/Aeternusofficial