BLOOD HARVEST RECORDS sets February 21st as the international release date for the double-LP vinyl edition of ÆVANGELIST‘s celebrated debut album, De Masticatione Mortuorum In Tumulis. Born in Fort Lauderdale, Florida, and led by Matron Thorn and Ascaris (both active under the black metal insignias of Benighted In Sodom), ÆVANGELIST play dark death metal to end all death metal. Like in a terrifying exorcism, the duo has extracted the very essence of the genre out of its carcass, showing it in all its putridity and disgust through the asphyxiating sounds and the growling choirs of De Masticatione Mortuorum In Tumulis, originally released on CD by I, Voidhanger Records in 2012 and now seeing a highly anticipated vinyl release through BLOOD HARVEST. 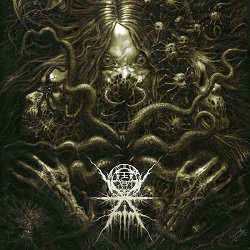 There’s a disturbing and totally hallucinating atmosphere haunting their songs – something that assaults and violates the senses, and which works on the subconscious in subliminal, occult ways. Comparable perhaps to Portal, Mitochondrion, Vasaeleth, and even latter-day Blut Aus Nord, ÆVANGELIST ride on majestic black wings, dispensing chaos, darkness, and fever like rotten hosts with which to feed countless agonizing souls. You won’t find anything pleasant in this dark epiphany – no melodies, no nice hooks, no frills. Just ugliness and utter despair: the tortured screams of those who already inhaled the nauseating, unbearable stench of death while waiting for the horrendous vacuum of non-existence that lays beyond…

“WE ARE ÆVANGELIST, THE PROPHETIC ART OF THE ULTIMATE OBLIVION OF THE UNIVERSE, HERALDS OF AN APOCALYPTIC DEATH THEOCRACY. LOOK UPON THE SETTING SUN AND DESPAIR.”

Hot News: Ævangelist – New song from the most frightening album ever!