AFFECTOR, the highly skilled new international progressive rock/metal band consisting of German guitar-player Daniel Fries, Dutch drummer Collin Leijenaar (Neal Morse/Dilemma) as well as the US based bass player Mike LePond (Symphony X) and vocalist Ted Leonard (Spock’s Beard/Enchant/Thought Chamber), are drawing nearer to the release date for their debut album, “Harmagedon”, on May 21st, 2012 in Europe and May 22nd, 2012 in North America via InsideOutMusic.​

To further introduce the band’s elaborated and atmospheric songs, a 5-minute online teaser compilation with excerpts from various songs off the “Harmagedon” album has also been launched via the InsideOutMusic YouTube channel.

Check it out here:
http://www.youtube.com/watch?v=zyOAmukTy9g​

AFFECTOR checked in to comment on the song launch as follows:

Collin Leijenaar: “As we move closer to the release ‘Harmagedon’, I’m excited to be able to stream a full song on our Facebook page. We chose ‘New Jerusalem’ in the radio-edit version. This song is a bit more straight-forward than some of our other songs, but still contains the ‘AFFECTOR-sound’. I’m curious if this will ever hit a radio station, but we thought it would be fun to at least have the option :)”

Daniel Fries: “I’m thrilled about the upcoming release of ‘Harmagedon’, this is like a dream come true for me and an honor to have worked with those prog stars! Every time I listen to ‘New Jerusalem’ I’m blown away by the vocals of Ted Leonard. I hope the listener will feel the same way.” 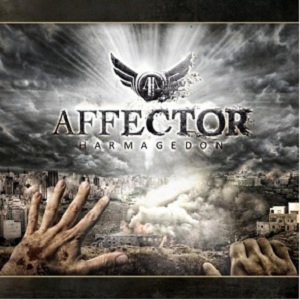 The initial version of “Harmagedon” will come as limited edition CD in slipcase packaging and additionally featuring 2 special acoustic versions of the songs “Harmagedon” and “New Jerusalem” as bonus tracks.
The album will be also available as strictly limited 2LP version in 180gr. vinyl, as standard Digital Download and also as HD-Audio Digital Download version via I-Tunes.

AFFECTOR’s “Harmagedon” album can be now pre-ordered from the InsideOutMusic shop in all its physical release formats at the following locations:

Some of the album’s guests and other established Prog musicians checked in to comment on “Harmagedon”:

“AFFECTOR’s ‘Harmagedon’ is a solid blast of PROG metal complete with burning solos, odd time signatures, orchestral highlights, and Rock riffs that will tear your head off! Excited that I could be a part of this album!”
– Jordan Rudess (Dream Theater)

“I think AFFECTOR is amazing! Great playing, composition and production…and you can’t beat the lyrics! Congratulations to Daniel and the gang. Excellent work!”
– Neal Morse

“If you are a fan of Dream Theater and progressive hard rock, this is an essential addition to your collection…you will love it!”
– Mike Portnoy (ex Dream Theater, Adrenaline Mob)

Citing broad musical influences and diverse inspirations between prog and classic as well as modern rock acts, AFFECTOR is like an open marriage between progressive rock/metal and orchestral minimalism, destined to appeal to everyone into bands ranging from Dream Theater, A.C.T., Symphony X, Darkwater to Queen or Rush.