AFFECTOR’s debut album, “Harmagedon”, which was mixed and mastered at The Mouse House in Los Angeles by Rich Mouser (Spock’s Beard/Transatlantic/Neal Morse), will be released via InsideOutMusic on May 21st, 2012 in Europe and May 22nd, 2012 in North America. 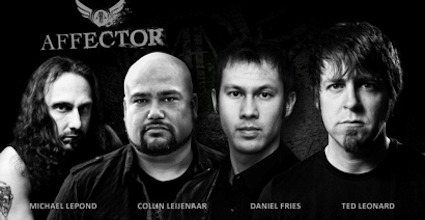 AFFECTOR’s Collin Leijenaar comments on the signing as follows:
“We are thrilled to be signing with InsideOutMusic / Century Media. It is THE home for progressive rock & metal, and it feels very much home to us! It has always been a personal dream of mine to release something on this label, and with AFFECTOR this dream has come true! I’m stoked about the future of AFFECTOR, and I hope the audience is too!?”

Citing broad musical influences and diverse inspirations between prog and classic as well as modern rock acts, AFFECTOR is like an open marriage between progressive rock/metal and orchestral minimalism, destined to appeal to everyone into bands ranging from Dream Theater, A.C.T., Symphony X, Darkwater to Queen or Rush.