“No Attachments” – a brand new studio album by one of the best progressive rock bands from Poland, After… – will be released by Metal Mind Productions on November, 21st (in US on December, 6th). And today you can listen to the first promo track “Enchanted” in THIS location.

Wojtek Tymiński: “It’s one of the quieter songs on the album. This was the last song written for the album. The idea came up in my head but I thought that this would be another piece left for the unknown future. At the beginning the track was circling between us in the version which I registered at home. That first version had probably more space but also less pulse. Radek and Mariusz have added great rhythm section to my guitar idea and the song took on a completely different shape. I think this is one of the favorites pieces written by us.”
After… was formed in 2002 in Wloclawek. In November 2005, they released their debut album “Endless Lunatic”, featuring guest appearances by Colin Bass (Camel), Józef Skrzek (SBB) and Jacek Zasada (Quidam). To promote the album, the band played several concerts in Poland and Western Europe, sharing the stage, among others, with Fish, Quidam, Riverside, and Sylvan. In June 2008 their second studio album “Hideout” was released. The new album was very well received both in Poland and abroad. Their third studio album “No Attachments” marks the beginning of a new exciting era in the band’s career. Not only it brings interesting arrangements and melodies but it is also being produced in cooperation with the musicians of acclaimed British act The Pineapple Thief. 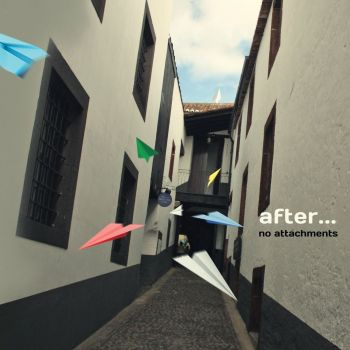 Hot News – After… see them working in the studio