Germany’s dark metal quintet AGATHODAIMON is currently working hard on the successor of their 2009 release “Phoenix”.

They’ve entered the Kohlekeller Studios in February and hope to finish the recordings with producer Kristian “Kohle” Kohlmannslehner in late April.

The band’s new album is entitled “In Darkness” and will be released this summer!

You surely want to know what to expect from the new release, don’t you? 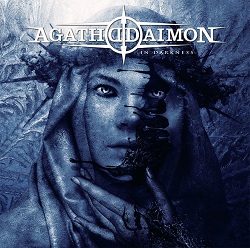 Here’s what guitarist and vocalist Sathonys has to say about it:

“We’re sure IN DARKNESS has a lot of killer songs, and we did step into the right direction – though it’s also a step backwards. Back to the roots, to be clear.

We collectively felt that PHOENIX reached a point that’s as far as we can go, without denying our roots. So we summoned the spirit of the old times (of course without trying to pretend it’s 1995).

We’ve put focus on the atmosphere and got rid of elements which did not fit to our vision. To summarize, I’d say it’s less technical, but more dense, coming rather from the heart than our heads. This sounds strange maybe, but you’ll get it once you’ll hear the first songs.”

Do you want to know more?

AGATHODAIMON have also revealed the cover artwork, created by Hicham Haddaji of Strychneen Studio! Enjoy it below.

If you want to see AGATHODAIMON live, you should visit the 11th edition of the Schlachtfest in Aurich, Germany: www.facebook.com/events/136106359881906

AGATHODAIMON’s “In Darkness” is expected to be released on June 28, 2013 via Massacre Records!