Alastor, the legendary thrash metal band from Poland returned in late 2012 with a brand new album. “Out of Anger” was their first release after the line-up change in 2010, when Mish Jarski replaced the band’s previous singer Robert Stankiewicz. And today the band reveal a video clip recorded to the track “Crawling”. You can see it on Metal Mind Productions’ official channel on YouTube in THIS location.

Michał ‘Mish’ Jarski comments: “We decided together that we do not want to make any short movie, to show a story in an obvious, straight forward way, but we rather prefer to blend the story into the clip in a very discreet way so it could be – like the lyrics – interpreted individually.” 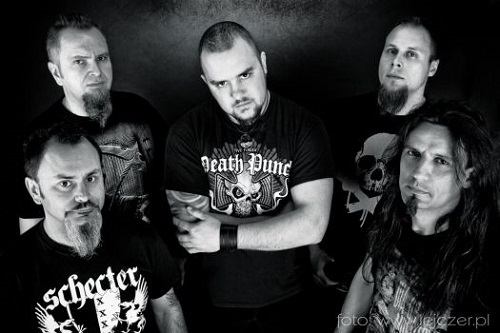 The album “Out of Anger” consists of 8 tracks which feature thrash metal with the addition of some traditional sounds. The album features a couple of guest appearances – Bartosz “Barton” Szarek (Lostbone, Chain Reaction) and Adam “Baryła” Bryłka (Horrorscope) on vocals and Lech “Blackpitfather” Śmiechowicz (Horrorscope) on the guitar.

The thrash metal band Alastor was formed in 1986 in Kutno, Poland and through the years they have become a legend. The band has an established position on the Polish metal scene – their previous studio albums were appreciated by fans and critics alike. Their debut album from 1989, entitled „Syndroms of the Cities”, was recorded in the following line-up: Sławomir Bryłka  (drums), Mariusz Matuszewski (guitars), Grzegorz Frydrysiak (bass), Waldemar Osiecki (guitars) and Robert Stankiewicz(vocals). The album was originally released on vinyl by the Italian label Metalmaster. Their sophomore album “Destiny” was recorded in 1990 but it was never released. The year 1994 brought their next album “Zło” (LoudOut Records). In the following years, the band managed to record two more albums („Żyj, gnij i milcz” in 1997, „Spaaazm” in 2005). In 2010, the band underwent some line-up changes. In the new, improved line-up the band recorded their new material „Out of Anger”.  In September 2012 Metal Mind Productions re-issued Alastor’s first two albums – the material was remastered and released in a limited digipack edition.

ALASTOR – Syndroms Of The Cities (Reissue)

Hot News: Alastor reveal the artwork and first track from the new album!