Pirate Metallers ALESTORM will hit the sea in September and invade Europe with a tour. With them on the ship are BRAINSTORM as well as TROLDHAUGEN as a support act, and also a new record. That will come out on August 4th and is entitled „Sunset On The Golden Age“.

Of course the title of the album is a reference to “The Golden Age of Piracy”, which was a period roughly between the years 1680-1720. „During that time all the famous pirates you’ve probably heard of were doing their thing in the Caribbean“, the band says. „Stealing treasure, kicking the ass of the British Navy, plundering wenches, and so forth. Like all good things, this age had to come to an end, and so we’ve used that as a general theme for this album. There’s also songs about drinking and partying too.“

Talking about partying – that ´s what visitors surely can do on tour. Next to music playing pirates ALESTORM German Power metallers BRAINSTORM will ensure some good mood and will play a full live set as well. Their new record „Firesoul“ just came out in April and entered the German charts on no 43. During some release shows having taken place directly in April the band could prove once more that they are a guarantee for good live mood and also that they belong the most sympathic and authentic German Metal acts.

Support act TROLDHAUGEN describe themselves as very experimental. The Folk metallers will be on a European tour for their first time. Current release is a single named „Gimme Gimme Gimme (A Troll After Midnight)“. 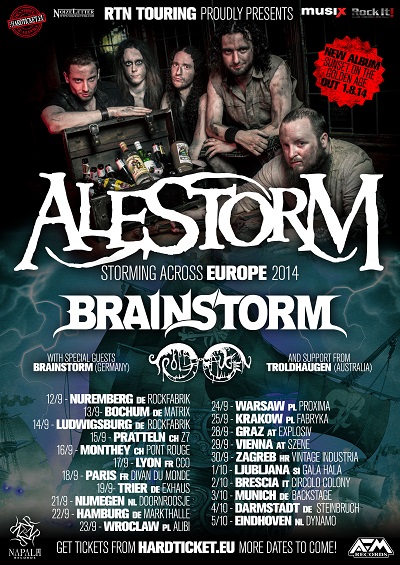 ALESTORM – Sunset On The Golden Age

Hot News: Alestorm – Live at the End of the World

ALESTORM – Back Through Time