Karnæ born in 2008. It all began in the early months of that year, when Kaio (guitar) and Simone(vocals) were playing a gig together with their ex-band: Santantonio and Embrace.

After some hours spent talking about music, they decided to exchange contacts for possible future musical projects.

A few months later, Santantonio split. Kaio decides to record a demo in studio and share it with some musicians to set up a new band. It’s time to contact Simone, who heard the material and decided to co-found the new band.

The first two members joining the band were Andrea (drums) and Giovanni (bass). In November, with its first 4 members Karnæ was born.

The band began working hard on arranging the songs, but in April 2009 Giovanni leaves the band, immediately replaced by Fra. In October, Marco (guitar) joined the band. With the renewed 5-men formation, the band started working hard on finishing the songs to be recorded on the first ep. 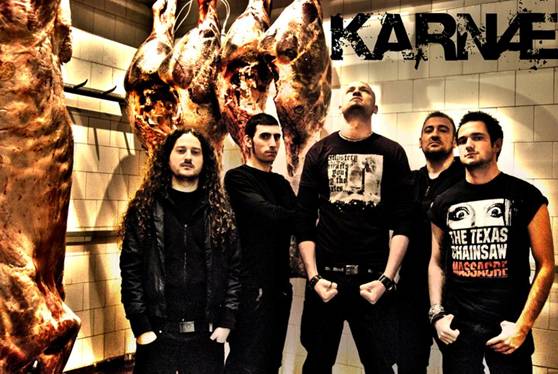 Recordings were made during the last week of August 2010 at Noise Factory Studio in Milan with the direction of Marco Bonanomi.

The ep ‘ Evil Is A Necessity ‘ was published in April 2011. In the same month, the band signs for management agency Alkemist Fanatix Europe for promotion and distribution of the ep.