With change comes new ideas, and “Elements of The Infinite” is the culmination of a flurry of new ideas within ALLEGAEON. It is, in essence, an album with a chip on its shoulder, a point to prove, and a big step out of the shadows from its predecessor. With two new members, the band is in a very different place than they’ve ever been, and the music reflects that. Guitarist Greg Burgess adds: “It is material that stays true to where we’ve come from, while exploring some new territory. We’ve had the opportunity to do some things we’ve wanted to from the beginning, but haven’t been able to until now. We’re very proud of this record, hopefully it will live up to what our fans have come to expect from us.”

“Elements of the Infinite” will be released on June 20, 2014 in Europe. ALLEGAEON recently completed work on a video for the song “1.618“. The video can be viewed exclusively on http://www.metalblade.com/allegaeon. While there, fans can also pre-order the new album in various bundle packages. 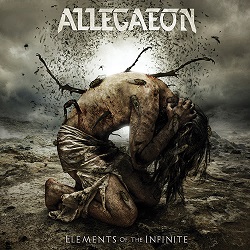 Guitarist Greg Burgess comments on “1.618“:
“The 1.618 video is quite a departure from what ALLEGAEON has done in the past. For our music, lyrically speaking; it’s been really hard for us to come up with story lines to capture what Ezra was singing about. So in the end we always ended up just having performance videos. This video is more like us hanging out and having fun, a reflection of our personalities, and well… poking fun at ourselves for the lack of success we’ve had with the music video medium.”

After having spent some time in drummer-limbo, the band enlisted Brandon Park as their new permanent drummer in 2013. Additionally, the departure of Ryan Glisan led to the addition of guitarist Michael Stancel. The re-tooled ALLEGAEON line up is fresh, hungry, and ready to solidify the band’s place within the elite, virtuoso-filled world of extreme technical death metal.

“Elements of the Infinite” was recorded, mixed and mastered by Dave Otero at Flatline Audio in Colorado Feb-April 2014. Otero’s work has been more prominent in the last few years – some fans may have heard his work on the latest Cattle Decapitation album, Cephalic Carnage, and more. Otero’s efforts here, along with the band’s new material, has led to ALLEGAEON‘s most realized and mature release to date. Musically, fans will be treated to orchestrations that provide significant depth to the sound. The orchestrations were composed by guitarist Greg Burgess along with Joe Ferris (monumentalaudio.net).

Lyrically, the band has gone full-tilt with their space and science themes. Vocalist Ezra Haynes has penned songs that discuss both theoretical and practical science topics. Anyone who may be watching “Cosmos” with Neil de Grasse Tyson will surely catch references to Dyson Spheres, the high probability of alien life in the universe, humanity’s eventual exodus from earth, the golden ratio, and much more. It’s as fun dissecting the lyrics as it is the complex and challenging music.

ALLEGAEON – Fragments Of Form And Function