Altar of Plagues have announced some European dates, Support comes from Monarch.

Irish act Altar of Plagues was formed in 2006. Terms that are most frequently used to describe their sound include black metal, ambient and progressive or post metal, though it seems no one description can sum up the acts massive sound. The act themselves consider black metal to be the genre to which they are most attached, but on the contrary they have also been quoted to take influence from acts as diverse as Emperor, Bjork, and Arvo Part The bands untraditional aesthetic and approach to their music has led to Altar of Plagues appealing to a wide variety of listeners and this may be seen by the diverse range of acts Altar of Plagues have toured with, including Isis and Mayhem, as well as having appeared at festivals that focus on ‘extreme’ metal and festivals that encourage experimentation and diversity. Following the release of only one demo and an EP, Altar of Plagues signed to Canadian label, Profound Lore Records. In 2009 the act released “White Tomb”, an album that was described by a number of critics as one of 2009’s best and most exciting releases (and was featured in Decibel Magazines Best of 2009 list). Last year saw the band tour extensively throughout Europe, and now 2011 is proving to be an even more promising year for the act. 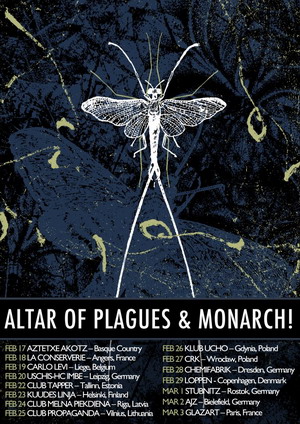