“A New Dawn Ending“, third studio album of the Italian female fronted Power Metal act ANCIENT BARDS, will be released on April 25, 2014, via Limb Music. The album will be third and final part of the “Black Crystal Sword Saga” trilogy, which began with “The Alliance Of The Kings” album in 2010, and was continued on “Soulless Child” in 2011. Album’s front cover artwork was painted by Felipe Machado Franco, artist known from cooperation with acts such as BLIND GUARDIAN and RHAPSODY.

The album will include 10 songs, between them two suites: one of over 12 minutes, and one of nearly 17 minutes.

“A New Dawn Ending” samples can be streamed on this location: http://www.limb-music.com/ancientbardsnews 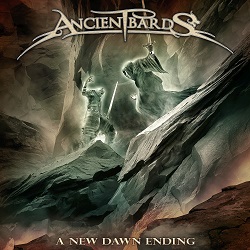