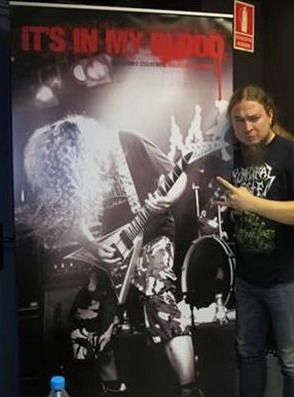 Spanish Thrash Metal hopefuls ANGELUS APATRIDA have recently been presented as new endorser for Jackson Guitars, becoming the first Spanish band to ever be part of the Jackson Family.

“It’s a dream come true for us”, states guitarist Guillermo Izquierdo (pictured above!), “since I started playing guitar I knew that I wanted to play a Jackson. I just couldn’t imagine myself playing other guitars. All the bands I admired played them, and they look better than any other brands!”

This association between ANGELUS APATRIDA and Jackson marks another massive step forwards in the history of a band that in the last year has become used to break frontiers, not just in their homeland Spain, where they became a major success during 2010 topping all annual polls and entering the official sales charts, but also abroad. The awesome response their acclaimed latest album effort, “Clockwork”, the two European tours (with Skeletonwitch and Warbringer as well as being part of the “Bonecrusher Fest 2011” next to Dying Fetus, Keep Of Kalessin, Carnifex and many more) in support of the release as well as the honour of opening up for Slayer and Megadeth in Spain earlier this year have established the band within the Thrash Metal community as a strong and hopeful new force to be looking out for.

Accordingly, ANGELUS APATRIDA have now also started to work on new material for the forthcoming record, due to be released sometime in 2012 via Century Media Records. “So far, the new songs sound more sharp, more direct and more aggressive. We are happy to realize that the musical development we experienced within this last year is now visible in the way write new material”, declares bassist Jose Izquierdo.

Meanwhile, ANGELUS APATRIDA have a pretty busy summer schedule, appearing at most major festivals in Spain, including the Spanish edition of Sonisphere on July 15th, 2011 next to Iron Maiden, Alice Cooper, Dream Theater, Arch Enemy, Slash and many others. Here are all of the band’s upcoming tourdates:

ANGELUS APATRIDA released its much lauded album “Clockwork” via Century Media Records in June 2010 and subsequently charted in its home country Spain on #44 as well as in Greece on #45. Check out the band’s latest video clip for the song “Blast Off” here:
http://www.youtube.com/watch?v=fTpW2-_TQnQ

Hot News: Angelus Apatrida – Debut Video Clip for “You are Next”