The artwork for »New Southern«, the upcoming debut album by Oklahoma natives & saviors of southern-infused hard rock ANTI-MORTEM, has been revealed worldwide today. 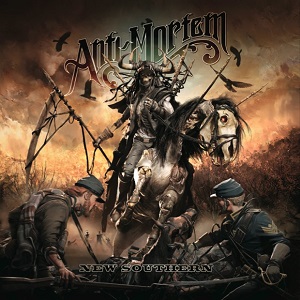 The »New Southern« bundle – which includes the album + an exclusive t-shirt is available for pre-order now via http://bit.ly/1hPIBT7.

For a taste of ANTI-MORTEM’s fusion of southern rock & heavy metal, check out:

ABOUT NEWCOMERS ANTI-MORTEM:
What the American hard rock and metal scene needs right now is an infusion of youth and some new blood coursing through its veins. Enter ANTI-MORTEM and their upcoming debut album, New Southern. Formed in 2008 and with over 300 shows already to their name, the combined average age of this Oklahoma quintet is just 21-years-old. ANTI-MORTEM were raised on southern rock & heavy metal and driven by a hunger to make an impact. The band dole out bottom-heavy and groove-laden anthems with every track and infuse a modern sense of melody that is the signature trademark of all the metal greats they’ve learned from.  Also present and accounted for: southern swagger in spades, courtesy of the band’s roots and upbringing.