Italian brutalists ANTROPOFAGUS will invade Russia for the first time ever next month when they embark upon the “Evoking the Cenobites Russian Tour 2013” with Moscow’s GRACE DISGRACED.

The tour will get underway on February 2nd at Zhara in Kharkov, Ukraine and end on the 17th, during the second day of the Coyote Brutal Fest in Moscow. Tour dates are as follows: 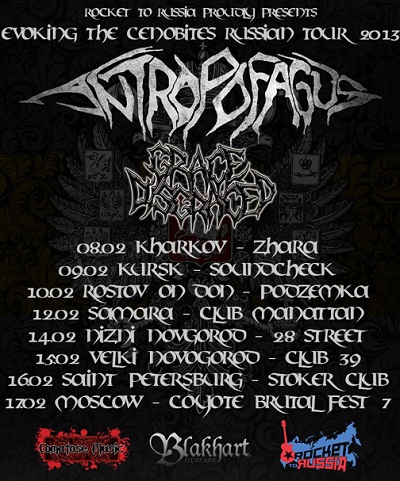 In November of last year, ANTROPOFAGUS made their first foray into the world of music videos when they premiered a visual accompaniment for the song “Sanguinis Bestiae Solium” from their 2012 Comatose Music release Architecture of Lust. The video was directed by Davide Cilloni and filmed on location at a deconsecrated church in Balestrino (SV, Italy).

Check it out at this location.

After being dormant for nearly 10 years, Italian maniacs ANTROPOFAGUS has awakened! The band’s brutal return to the death metal scene Architecture of Lust, is out now through Comatose Music. Musically, their approach has evolved into a more technical style, yet sustains a classic death metal presence with frantic riffing and supreme drumming courtesy of Davide “Brutal Dave” Billia (Putridity and Septycal Gorge). Lyrics are inspired by the deranged works of Clive Barker and thrive with gore and sickness. Architecture of Lust comes complete with an awesome 16 page booklet. This CD is the embodiment of evil and sure to be a top release in 2012! For fans ofHour of Penance, Nile, Fleshgod Apocalypse, Immolation.

Architecture of Lust is available at www.comatosemusic.com.