Portland, Oregon heavy rockers APE MACHINE are set to kick a 13-date trek across Europe next week in support of their newest release, Mangled by the Machine.

The tour, which begins on Friday, May 31st in Münster and includes an appearance at the Freak Valley Festival (June 1st in Netphen – www.freakvalley.de) will see APE MACHINE providing direct support for Small Stone recording artists NIGHTSTALKER. Tour dates are as follows:

Mangled by the Machine was released on May 14th via Ripple Music. This already critically-acclaimed album was immediately made available on CD, black vinyl and digital formats. Earlier this week, Ripple Music issued a limited edition (100 copies only) Splatter Vinyl that comes with a signed poster of the album’s original cover concept. To order, visit ripplemusic.bigcartel.com.

A conceptual album that mixes animal aggression and technical precision, APE MACHINE‘s Mangled by the Machine carries an organic depth and warmth rarely heard since the time of rock’s glorious early years, and infused with an exceptional modern sensibility. When the pissed-off, protest-minded lyrics lock in with the band’s stone-cold groove, APE MACHINE demonstrates an earth-shaking ability to rock. A true four-piece, the group has been called real heavy-psych for the iPhone generation that delivers true guts and glory rock and roll. Mangled by the Machine will be available as CD, digital, and vinyl releases. For Fans of: Quicksand, Led Zeppelin, The Sword, Black Sabbath, Soundgarden, Jethro Tull, and The Rival Sons. 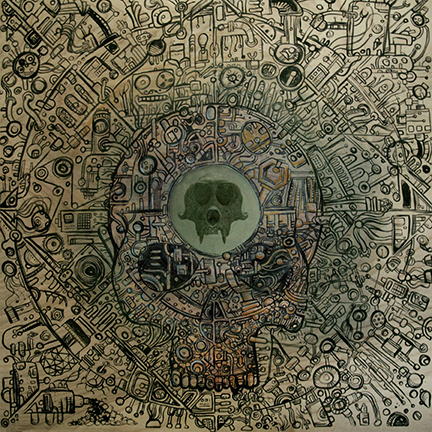 A true four-piece, Portland, Oregon’s APE MACHINE has been called “a rock and roll band with a finger on the pulse of the 70’s and their asses firmly in the present” and “real heavy-psych for the iPhone generation” that delivers “true guts and glory rock and roll.” Combining psychedelic, classic and progressive rock with arena-worthy metal, bluesy stoner-rock and catchy riffs in odd signatures, APE MACHINE’s music carries an organic depth and warmth rarely heard since the time of rock’s glorious early years (or your Dad’s bad ass record collection) infused with an exceptional modern sensibility. Having finished up a short Southwestern and West Coast U.S. jaunt with Austrian retro-rock sensation, Been Obscene, APE MACHINE is preparing to take their laser precision, yet frenzied live show to Europe in late May (including dates with the much vaunted Orange Goblin) in support of their brand new album, Mangled By The Machine.