Mexico’s Death Metal Darkness INFINITUM OBSCURE will begin their US invasion this week when the “Arrival Of The Black – Vinland Tour 2013” gets underway on Friday, April 12th at The Black Castle in Los Angeles.

INFINITUM OBSCURE will be direct support for the legendary SORCERY. The tour features a total of 15 concerts across the United States of America that promise to deliver the most utter Death Metal Darkness. 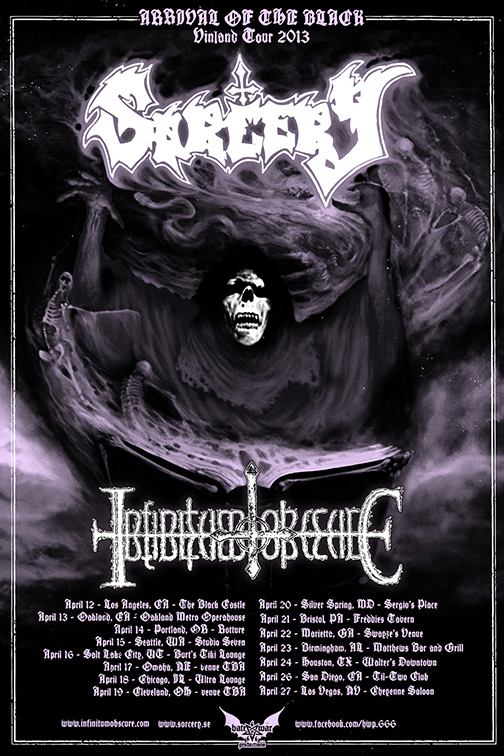 INFINITUM OBSCURE recently released the three-song MCD, The Luminous Black on Deathgasm Records. Featuring one new track, a re-recorded version of “Path to Apocalypse” from the band’s 2006 debut Internal Dark Force and a blistering take on BATHORY’s “Through Blood by Thunder,” The Luminous Black will be unveiling what’s to come in INFINITUM OBSCURE‘s upcoming full length album. This will be limited to a one time only pressing. Visit www.deathgasm.com to order.

INFINITUM OBSCURE was founded in late 2000 by Roberto Lizárraga with the sole purpose of expressing a personal vision of Death and existence in the form of obscure Death Metal.

The band has released one split (on CD and 10″ mini LP formats), 2 full-length albums (on CD and LP formats), one 7″ EP, and two demos (one on Cassette and one on CDR), between 2003 and 2009 and are currently working on their third full-length album.
Their last album, entitled Sub Atris Caelis (2009) was produced by the legendary Bill Metoyer and mastered at the reknown Necromorbus Studio in Stockholm, Sweden, rendered by the artwork of the infamous Ketolahelvete.

In April 2012, INFINITUM OBSCURE completed a short, seven date European tour, as support for DEAD CONGREGATION. The “Congregation of the Obscure European Tour 2012” was the band’s first time in European soil.

During June/July of 2010. INFINITUM OBSCURE completed a three week U.S. tour in support of NOMINON. The “Death Metal Darkness U.S.A. Tour 2010” was the band’s first extended tour in the United States of America.

Other smaller tours have included two Mexican tours (2006 with BELPHEGOR and 2007 with WATAIN), a West Coast US mini tour (2006 with DESTRÖYER 666), three date mini US tour (2010 with DEFILED), a Mid-West US mini tour (2003 with THE CHASM and OBEISANCE) as well as a two date mini tour in their home state of Baja California (2002 with ANGELES DEL INFIERNO), as well as several Festival appearances in Southern California.