Virginia-based melodic tech-death metal masters ARSIS, are pleased to officially announce Brandon Ellis as their new guitarist. Brandon has toured with the band in the past but will finally make his recording debut with ARSIS’ upcoming full-length release. Brandon replaces guitarist Nick Cordle who was recently tapped to replace Christopher Amott in Swedish supergroup, ARCH ENEMY.

“I am super happy to say that Brandon Ellis has recently become the new lead guitarist for ARSIS,” commented vocalist/guitarist Jim Malone. “Not only is he one of the best musicians that I have been able to work with, but he shares my passion for all things that are 80’s metal, including ridiculously tacky paint jobs on guitars. I am beyond excited about writing new material with Brandon. Until then, listen for his shredilicious leads on the upcoming ARSIS full length. Come check him out live with ARSIS this December!”

“Initially when Nick joined ARCH ENEMY, we all thought we could make it work with him having the time for both bands,” continued bassist Noah Martin. “Things unfortunately overlapped and we weren’t able to work on the new album with him. We appreciate everything he’s done for ARSIS. We’ll miss our friend greatly and do wish him all the best. Both Nick and Ryan Knight (THE BLACK DAHLIA MURDER), contributed ridiculous leads for the album. 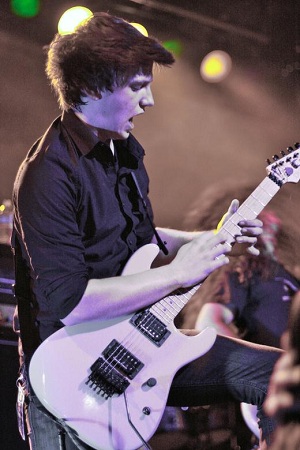 Brandon’s solos on this full-length are both crushing and particularly creative. His presence, along with Shawn’s (Priest – drums), were integral to the tone of this album. We’re in the post-production stage, now that the masters were just finished. In the meantime, come have beers with us on the SONATA ARCTICA run!”

Check out a quick example of Brandon’s playing here.

ARSIS – Starve For The Devil