ASG have confirmed a full European tour for this Spring. The North Carolinian heavy rockers will be joined on the road by Canada’s Anciients. For tourposter see below.

The dates are in addition to the already-announced appearances at Roadburn festival in Tilburg, The Netherlands and Desert Fest in London, UK, where the tour will end.

Vocalist/guitarist, Jason Shi, commented: “The fellas and I are real excited to embark on another transatlantic rock voyage with Anciients! Should be good times and great shows! Wrapping up the tour in London for Desert Fest is going to be a real treat!”

This will be the first European outing for ASG since the release of last year’s album, Blood Drive. The 12 track album was produced by Matt Hyde (Slayer, Fu Manchu) and released to broad critical acclaim.  The striking artwork for the album was created by Malleus, an Italian trio who have previously been responsible for pieces for High on Fire, Swans and The Flaming Lips. Blood Drive is available to order from the Relapse store here or via iTunes here.

In November, ASG unveiled the video for the track Scrappy’s Trip, which featured live footage from a show in their hometown of Wilmington, NC. Watch the video here.

Live juggernauts, Anciients, will present their highly acclaimed full-length debut Heart of Oak (released last year via Season of Mist), branded by Decibel magazine as “one of 2013’s most anticipated albums” for the first time in Europe. Anciients have been lauded by German Metal Hammer to have “the talent to be the next big thing”. 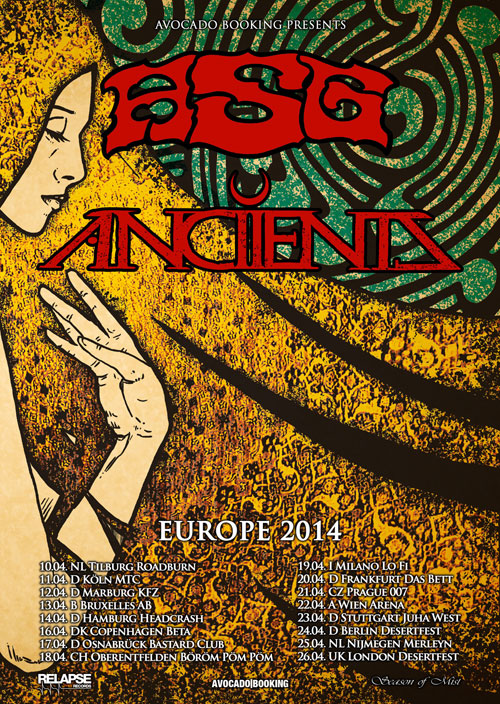