Ashiqur will release his first single ‘Miracle Of Living’ a track from his upcoming debut Album on 2nd February, 2013.

Ashiqur Rohman is a singer/ songwriter/ composer based in Guwahati originally hailing from Mangaldai, Assam. Inspired by varied genres and artist like Elvis Presley, Led Zeppelin, Badfinger, Dr. Bhupen Hazarika, Jayanta Hazarika to name a few…Ashiqur says “I came in contact with a lot of musicians and started developing a real taste for coming into the music scene professionaly. I started writing songs from 2004 and in 2007 came up with the idea of making a music album. But it was not before the later part of 2011 I realised my dream when I met guitar virtsuo and one of India’s finest guitarist Shantanu Baruah”

Shantanu Baruah was a mainstay guitarist for Zubeen Garg. He has also collaborated in many Assamese Movies, albums and also in Bollywood. He was also a member of Veteran rock pioneers in Assam ‘Moon Wind’. 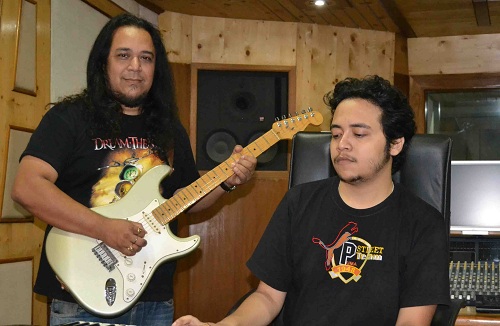 Shantanu Baruah comments ‘’Im very happy at the prospect of releasing the single ‘Miracle Of Living’ which also will be my first online release. The single has turned out to be great. Happy listenting’’

Ashiqur adds “The project ‘Rock N’ Roll Haven’ Started in December 2011 and after 13months and 8Songs later and with a collaboration of Assam’s finest musicians, sound engineers, friends and some very hardworking men the album was finally completed. The album is a back to the roots english rock album incorporating genres like rock, rock n’ roll, blues, power pop, hard rock, grunge, country etc.”

The album ‘Rock N’ Roll Haven’ is composed and sung by Ashiqur and music arranged and mastered by Shantanu Baruah.