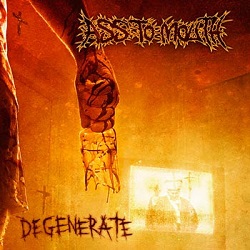 ASS TO MOUTH were founded December 2004 with line-up consisting of: Sandro – vocals, Jarek – bass/vocals, Maciek – guitar, and Pablo – drums. During the first 3 years of activity the band have done over 50 shows in Poland and abroad, including tours with Ahumado Granujo, Epitome, Parricide, Squash Bowels, Jig-Ai and Neuropathia. November 2006 the foursome have self-released its first MCD “Asses For The Masses”.
In the middle of 2007 Sandro has been replaced on vocals by Jankes and the band recorded 5 songs for 7”EP split with Jig-Ai (which was eventually released as 10″LP in 2011). ATM have been playing live in the new line-up, including European tour in support of their first full length LP “Kiss Ass” released on Lifestage Productions in 2008, Ukrainian tour along with Epicrise, appearances on European festivals such as Obscene Extreme, SWR Metalfest, Arsch Cholio, Death By Thousand Cuts, and numerous shows in Europe.
At the beginning of 2009 Jankes left ATM and the band existed as a 3-piece. April 2010 Kuba (ex-Selfhate, ex-Toxic Bonkers) has joined the band on vocals and the band started to work on their second full length LP.
Until now ASS TO MOUTH have played around 130 shows in Poland, Ukraine, Russia, Germany, Austria, Czech Republic, Slovakia, Romania, Italy, Spain, Portugal, France, Netherlands and Belgium.

“Imagine pure old school grindcore (with a crusty edge of pissed off punks) that’s been hit with an ugly-stick covered in the bloody remnants of abortion, and you have Ass To Mouth.” – My Last Chapter

“This is one fantastic grind album from start to finish.  Unrelenting, violent, funny, it has everything any grind fan would be looking for.” – Heathen Harvest

“(…) And if you’ll ever want to listen to some grind, pick this up. This is how grindcore should be done.” – Metal Archives