With the arrival of the new female singer, Chaos Heidi, the band evolved but kept their trademark: a strong taste for varied atmospheres and styles.

Following and completing the ecological theme of the 1st Album, the lyrics and the artwork of “Fifty Years Later” echo the warnings of our world and picture the possible evolution of our planet in the years to come. 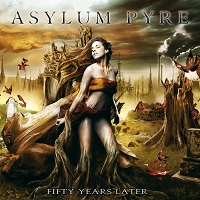 The track list of the album looks like this:
1. Will You Believe Me?
2. Dead In Copenhagen
3. The Frozen Will
4. These Trees
5. The Herd
6. Fisherman’s Day
7. Against The Sand
8. Any Hypothesis
9. Just Before The Silence
10. Fifty Years Later

“Fifty Years Later” was recorded and mixed by Didier Chesneau at the MII Recording Studio in France and mastered by Bruno Gruel at Elektra Mastering in France.

The song “These Trees” is available for pre-listening at our youtube channel: http://youtu.be/1ww0F2GXrWc