Chilean death metal legends ATOMIC AGGRESSOR reveal that they have finished recording their comeback album,Sights of Suffering. The album will not only be ATOMIC AGGRESSOR‘s debut album, but it will be the band’s first full-length for HELLS HEADBANGERS. “The album is on its way,” the band reports. “We have finished the recording sessions, and now starts the mixing stage. Pablo ‘Wawa’ Gudiño is the engineer working with us and is doing a great job. Everything sounds great so far.”

A fall release is tentatively planned by HELLS HEADBANGERS. Additionally, ATOMIC AGGRESSOR reveal the cover art and tracklisting to Sights of Suffering, which are as follows: 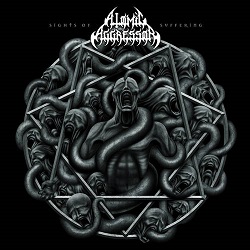 Between 1989 and 1992, ATOMIC AGGRESSOR became one of the most important bands of the Chilean death metal scene, as well as the wider South American one, after the recording of two influential demos, 1989’s Bloody Ceremonialand 1991’s Resurrection. Then, perhaps prematurely, they broke up.

Fifteen years later, in 2007, ATOMIC AGGRESSOR reunited to play a number of important metal festivals in Chile. Capitalizing on that momentum, a year later, the band released the Rise of the Ancient Ones demo compilation on HELLS HEADBANGERS. In 2013, a split 7″ with Death Yell – entitled Blind Servants, and the band’s first new recordings in five years – followed on HELLS HEADBANGERS as well the Live Ceremonial live CD on Rawforce Records.