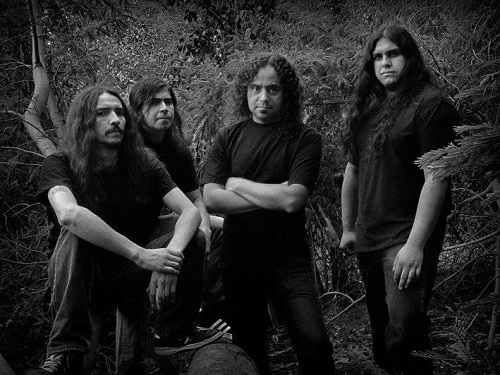 HELLS HEADBANGERS announces the signing of Chile’s ATOMIC AGGRESSOR. The old-school death metal legends will release their debut album, Sights of Suffering, through the label worldwide, with Rawforce Records handling the record in Chile. The band is currently recording the album at Pulsar Studios in Santiago.

“We are honored to be supported by HELLS HEADBANGERS and Rawforce Records in our largest project to date,” the band comments. “It hasn’t been easy, but we have tried to follow the story at the point we left in the early ’90s, keeping the style we used to play in 1991. Deathbangers can expect nine new tracks of genuine South American old-school death metal, including many rhythm changes, heaviness, and some thrash metal influences.”

Between 1989 and 1992, ATOMIC AGGRESSOR became one of the most important bands of the Chilean death metal scene, as well as the wider South American one, after the recording of two influential demos, 1989’s Bloody Ceremonial and 1991’s Resurrection. Then, perhaps prematurely, they broke up.

Fifteen years later, in 2007, ATOMIC AGGRESSOR reunited to play a number of important metal festivals in Chile. Capitalizing on that momentum, a year later, the band released the Rise of the Ancient Ones demo compilation on HELLS HEADBANGERS. In 2013, a split 7″ with Death Yell – entitled Blind Servants, and the band’s first new recordings in five years – followed on HELLS HEADBANGERS as well the Live Ceremonial live CD on Rawforce Records.

A release date for ATOMIC AGGRESSOR‘s Sights of Suffering is slated for later this year. Tracklisting, cover, and more news to be revealed shortly.