The Norwegian rock band AUDREY HORNE will release their new album in late January/ early February 2013! The fourth studio album is called “Youngblood” and promises to the ancient tradition of honest and true handmade music, a fresh enthusiasm and new energetic sound. “Redemption Blues”, “Youngblood” or “Show And Tell” not only live up to the numerous AUDREY HORNE classics, but turn into irresistible tunes with catchy refrains right from the start that will stay with you for a long time.

“Youngblood” is an excellent and sweeping Hard Rock album full of soul and without a doubt the highlight in the discography of AUDREY HORNE! The band will also present “Youngblood” live on stage – the year 2012 ends and 2013 starts for the Bergen based AUDREY HORNE with live shows in OSLO – with STONE SOUR (December, 18th) and BLACK DEBBATH (January, 25th).  In March 2013, AUDREY HORNE will come ove r for Shows in Germany and one show in Prague together with LONG DISTANCE CALLING and SOLSTAFIR.

“We are truly lookin’ forward to tour with such amazing bands as Long Distance Calling and Solstafir, and to come back and see all of our friends in Germany, and in Prague. With our new album, “Youngblood”, we are in the shape of our lives, and the vibe within the band have never been better. See you all out there!”

AUDREY HORNE will also play several festivals next summer – shows at the legendary “Sweden Rock Festival” and  the Czech “Masters Of Rock Festival” are already confirmed. 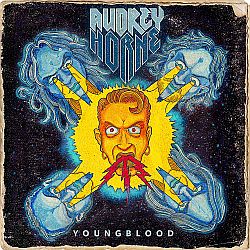 Hot News: Audrey Horne with new album “Youngblood” in the shape of their life + release in February, tour in march 2013!