Australian hardcore heavyweights CONFESSION are proud to announce the release of their third full-length album “Life and Death”, released in Europe on July 18 via Lifeforce Records!

Fronted by Michael Crafter, a key player in the hardcore scene who earned his stripes as founding member of I Killed The Prom Queen, CONFESSION have laid out 11 of their most accomplished tracks to date, further bolstered with contributions from the best of modern metallers; Ahren Stringer and Joel Birch of The Amity Affliction, Adrian Fitipaldes of Northlane and Karl Schubach of Misery Signals.

“Life And Death” is a sonic journey through the last 2 years of Crafter’s life; a political yet incredibly personal account, working through the multi-faceted issues that come with births, deaths, illnesses, friendships and love. Recorded in California with renowned engineer Dan Castleman (As I Lay Dying, Impending Doom), these are CONFESSION’s realest, most accomplished compositions to date.

CONFESSION are touring Australia this June as part of the Rampage tour, co-headlined by Deez Nuts, also featuring up-and-comers Hands of Mercy and Thorns. 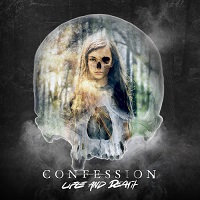