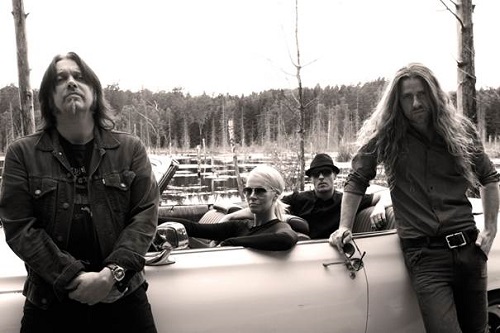 With the release of their self-titled debut record coming up November 01, 2013 newly found Doomsters AVATARIUM now give an insight look on the songs of »Avatarium«. This is how mastermind Leif Edling (CANDLEMASS) describes the album in his own words:

‘Moonhorse’
The first song I wrote. It’s about a little sick kid lying in bed daydreaming, and wanting to be out playing with his friends.
Lots of dynamics and contrast in this song. Light and shade. One of the best songs I have written I think.

‘Pandoras Egg’
About the sickness in the world. Collected by the gods and locked in, but now in free flow.
Jennie-Ann sings it like a female Ronnie James Dio. Great!

‘Boneflower’
THE MAMAS AND THE PAPAS meets BLUE OYSTER CULT. 60’s Pop vs Heavy Rock….melody contra Prog in the mid part.
Cool song describing the beauty in suicide. A forest where lovers go to commit unified suicide when the world denies them their love.

‘Bird Of Prey’
I took the London ripper out of context here and put him in modern day Berlin.
I’ve been to Berlin every summer for a number of years now and I really like the old “east” Berlin. It’s like what the London Soho was in 1980. Fantastic place with lots of bars, culture, food, cool people and music. Thought it was a nice idea to put the Berlin ripper there. Yes…before you say anything….i’m aware of the fact that there actullay was a real Berlin ripper in the 20’s or something like that. A guy having a butcher shop where he made sausage of his victims and sold it to his customers…hu….Lovely song though…

‘Tides Of Telepathy’
Nice semi-progressive track about a guy in a tower with an iron helmet on, enhancing his telepathic waves, sending them like tsunamis of fire to a parallel world they are at war with. Of course he puts his own world into ruins except his own tower. Leaving him totally alone there.

‘Lady In The Lamp’
The beautiful ballad! A girl is trapped by a wizard and is forced to sing for him. If she stops she dies.
Fantastic end solo by Marcus!

The debut single ‘Moonhorse’ was released September 20, 2013 and can be ordered here: http://smarturl.it/AVATARIUM-Moonhorse.

AVATARIUM – The Girl With The Raven Mask

Avatarium „All I Want” EP