AXEWORK – I think that not many Hard Rock- and Heavy Metal-Fans will recognize this band. The self-titled album of this band from Ingolstadt (Germany) was released in 1983. It was their first and last.

The compositions weren’t just arbitrary, as with lots of “simpler” bands of those days; no, AXEWORK had real talent. Though their songs are sophisticated, listening to them is quite easy and pleasant and they still sound surprisingly fresh and new.

AXEWORK don’t play pure Heavy Metal; there are some influences in the songs, but luckily the band wasn’t following the trends. Now we have an amazing timeless album which brings new facets to Rock Music.

One of the rarest vinyl of the early 80s is now released for the first time on CD. Influenced by URIAH HEEP and early ACCEPT a German hard rock / Heavy Metal classic is given to us who do enjoy classic’s status by music experts! This release includes fine songs, outstanding vocals and a private pressing far above average production. Of course from Karthago Records in the Heavy Metal classic series with an exclusive booklet, band history and limited-confirmed authenticity in the shape of a hologram. 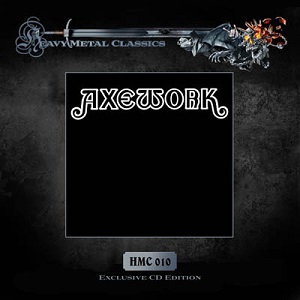