As Baroness thunder through their first week of North American tour dates since the release of Yellow & Green, the band set their sights on a return to Europe with a four week trek across the continent together with Royal Thunder, and an EP release of their 2012 BBC Session titled Live At Maida Vale (July 22 UK/World, July 19 Germany/Benelux and July 23 North America release via Relapse Records).

* Royal Thunder opens on all dates except October 3 and 6

Baroness announced their eagerly awaited return to the road with guitar player Pete Adams saying:“It’s hard to find the words to express how excited we are to announce this tour. Seven months ago, who knew when it would be or even if we could get back on the road. But here we are, picking right back up where we left off. A heartfelt thanks to everyone’s unconditional love and support for us through, let’s hope, the hardest time this band will ever see. We told you we’d be back so let’s do this thing!”

The stunning four-song EP highlights Baroness’ live prowess and gives the collection of songs an entirely new dynamic. Recorded at the BBC studios in Maida Vale in July 2012, the release will be available digitally and as a highly limited edition 12” with a B-side featuring a silkscreen of John Baizley’s iconic swan image. Pre-orders are available via Relapse here.

The band has also released a candid interview video where they share their thoughts on the Summer 2012 tour bus accident and reveal the first rehearsal footage with Nick Jost (bass) and Sebastian Thomson (drums). Paste Magazine’s May 14 cover story documents Baizley’s recovery via a series of interviews over the past several months, click here to view. 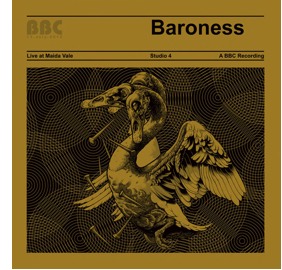