The Groove Monster is back!

BASANOS presents themselves more versatile than ever, not only in their music.
They proudly present the cover artwork to their new album “Cracking The Sledge“, which is going to be released on 23rd September 2011 by Noisehead Records.

Guitarist Roman:
“The cover of our debut “Instincts” was designed by myself according to our ideas and visions. This time we decided to put the artwork design into other hands, because it is a very time consuming process. So we were able to focus on the songwriting and the musical realization of the album. 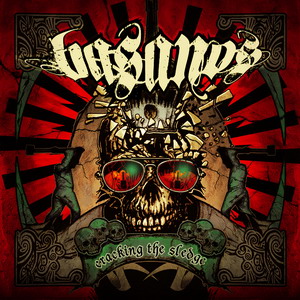 I started to search for an artist at deviantart.com and with San W. Decker from France, who designed covers amongst others for Megadeth and Freak Kitchen, we found an outstanding artist. He literally hammered our ideas in a very cool artwork.”

Stay tuned and get all the information of “Cracking The Sledge ” on www.basanos.net
This year … it’s time to “Crack The Sledge“!