Eric Bryan, known for his bass and vocal work with California’s Necroscope, and Abstract Prayer, and perhaps more famously as the ‘metal fan/bass player with the cool posters and figurines’ in the Sam Dunn documentary film “Metal: A Headbanger’s Journey,” has joined the ranks of ANGER AS ART in time for the band’s US tour dates through 2013 and 2014.

Says founding member Steve Gaines: “We have known Eric since Anger As Art supported Overkill back in 2005. He gave a very in depth critique of our debut album, one that let me know he listened closely. We did radio and print interviews with him… I joined his band onstage… only later did I realize he was the same guy from the movie.  Just a good guy, and an old soul. When we found our bassist position open, he came in and nailed it.”

Eric’s first show with AAA took place on August 9 in Los Angeles, CA. Video footage from that night can be seen at this location. Check out the bassist’s appearance in “Metal: A Headbanger’s Journey” HERE.

ANGER AS ART released their fourth full-length, Hubris Inc., in February of this year on Old School Metal Records. Called a “full-frontal, thrashtastic aural assault” by Bravewords’ Kelley Simms, Hubris Inc. is one of the most aggressive and intense albums in the band’s career. The album is available on CD and picture disc at shop.osmrecords.net.

Check out the official video for album track ‘Time Devours Life‘ at this location. 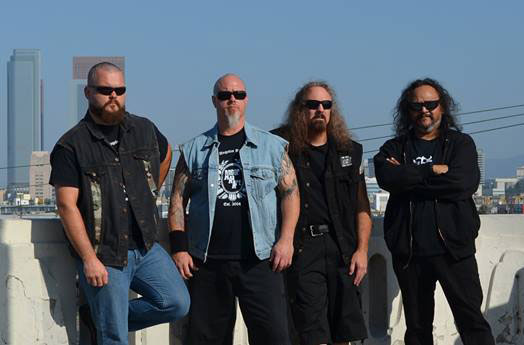 “Hubris Inc. is largely an enjoyable release, and proves that Anger as Art still has it in them to write some of the most energetic and catchy thrash material.” – Heavy Metal Tribune

“This is the fourth album by this four piece thrash metal band from Los Angeles, CA and you get fourteen songs that will blow your hair back. This brings back the memories of when there were a ton of great thrash albums out, and could slide in with those albums from back in the 80s with no problem.” – Hails & Horns

“If you are looking for thrash/speed metal, Anger As Art is the band you want to be listening to.” – Artemortifica