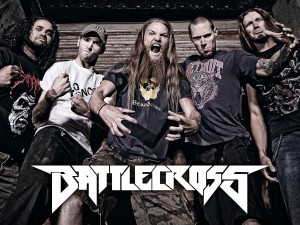 Detroit, MI’s BATTLECROSS and Bloody-Disgusting.comhave just released a brand new, live music video for the track Kaleb, cut from the band’s latest Metal Blade Records release, Pursuit Of Honor. Fans can check out the video now at this location. The video happens to be directed and edited by Ryan Glisan of death metal band and label-mate Allegaeon. The live footage in the video was filmed at the July 13th kick off date of the TRESPASS AMERICA festival in Broomfield, CO.

“Kaleb is the one song on the album that I’m the most proud of because I wrote it about my son,” states vocalist Kyle “Gumby” Gunther. “To have this be the track that Ryan used is really special to me, because seeing the intensity of our first arena show with such a hard-hitting song really gives the world a good idea of how much I love my boy. As a band, we’ll never forget that show. We were nervous as all hell!”

In other news, the band’s first single, Push Pull Destroy, has just reached its 1 millionth view on YouTube. The single has been featured on Sirius XM Liquid Metal’s Devil’s Dozen list for the last 40 weeks and is also featured on the free TRESPASS AMERICA festival sampler, available onAmazon.com at this location. Check out the music video at this location.

The band’s debut album, Pursuit of Honor, is available on Metal Blade Records and can be found at this location: www.metalblade.com/battlecross