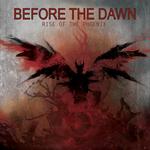 Finnish melancholic melodic death metal outfit BEFORE THE DAWN returns after living through a phase of changes and uncertainty – cleansed, renewed and stronger than ever! Leaving pieces of both the musical and personal past behind, mastermind Tuomas Saukkonen, lead guitarist Juho Räihä and their new companions get ready for conquering your ears with the finest blend of northern gloom and harsh melodic death metal.
Their seventh studio album and at the same time second release via Nuclear Blast Records is entitled “Rise Of The Phoenix” and will arise from the ashes on the 27th of April 2012!

“Massive changes in the line-up during 2011 ended an era of great frustration and brought back 110% dedication and professionalism into the band. The newfound energy and motivation steered us into a victorious European tour and made it possible to produce the strongest, fastest, heaviest and definitely the most epic BEFORE THE DAWN album so far!”

Fans and followers can look forward to a 9-song comprising masterpiece, consisting of the following tracks:

Prepare for the “Rise Of The Phoenix” – it’s going to be huge!

BEFORE THE DAWN – Rise Of The Phoenix

Before The Dawn – Pitch-Black Universe video