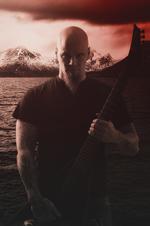 After 14 successful years with 7 highly acclaimed studio albums, mastermind Tuomas Saukkonen has now decided to put an end to his dark/melancholic melodic death metal band BEFORE THE DAWN as well as to all of his other current projects, including BLACK SUN AEON, DAWN OF SOLACE and ROUTASIELU. “I’ve already been thinking about this for a few years”, Tuomas states. “At some point I realized I was keeping the band alive without feeling right anymore. I lost the passion to make music my own way. Now that BEFORE THE DAWN is done, it’s logical for me to clean the table completely and start building something from scratch again.”

As far as his new goals are concerned, the multi-instrumentalist explains: “From now on I’ll solely focus on my new band called WOLFHEART – all my attention and energy shall flow into it. My main intention is to create a band that combines BEFORE THE DAWN’s engery with the low-tuned, dark, heavy and epic atmosphere of BLACK SUN AEON.”

In order to give you a first impression of what WOLFHEART will sound like, Tuomas has uploaded a teaser to his official YouTube channel. Watch it here: http://bit.ly/UQmL6j
To stay posted on future WOLFHEART related news, like the band on Facebook: http://www.facebook.com/WolfheartRealm
Finnish Kaaoszine has done an in-depth interview with Tuomas about the reasons for his decision to end BEFORE THE DAWN and his future plans with WOLFHEART. Read it here: http://kaaoszine.fi/wolfheart-interview-2013/

On the 23rd of February, BEFORE THE DAWN, BLACK SUN AEON and ROUTASIELU can be seen on stage for the last time over the course of a farewell show at Finland Klubi in Lahti, Finland.
Before that, a small Finnish unplugged tour with members of BEFORE THE DAWN and BLACK SUN AEON playing a best-of acoustic set of their repertoire plus a variety of songs by DAWN OF SOLACE will happen:

Later this year, BEFORE THE DAWN’s Finnish label Stay Heavy Records will release a 3CD-best-of-box entitled “My Darkness”, including songs by all of Tuomas’ bands. Keep an eye on the band’s website/Facebook page to stay updated on this.

Saukkonen’s last words are dedicated to the fans of all of his projects: “Even though a lot of things will change, the music I’ve created will never disappear and I am working on new music at the moment, even though under a different name. I hope to see everybody in Lahti on the farewell show and after that many times at WOLFHEART shows. You´re the best!”

BEFORE THE DAWN – Rise Of The Phoenix

Before The Dawn – Pitch-Black Universe video