With the release of their latest studio encounter »The Satanist«, Polish Black/Death Metal legends BEHEMOTH once again prove to be high up on the global Metal circus. The band, fronted by charismatic mastermind Nergal, has now been awarded for the “Best Album” at the annual Metal Hammer Golden Gods Awards.

Stated Nergal: “The awards have never been a motivation to our work…but when they happen, especially coming from such a prestigious media as Metal Hammer, we will embrace them! »The Satanist« – album of the year. Big deal for us! We hail everyone who made this possible… especially the BEHEMOTH legions worldwide who never fail in supporting us!” 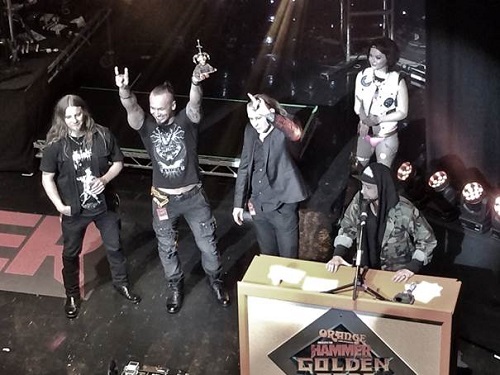 »The Satanist« was released on February 07, 2014 via Nuclear Blast. The album was produced by BEHEMOTH,Wojtek and Slawek Wieslawscy and Daniel Bergstrand in Hertz Studio. »The Satanist« was mixed by Matt Hyde (SLAYER) and mastered by Ted Jensen (METALLICA, AC/DC) at Sterling Sound. The cover art for »The Satanist« was painted by renowned Russian painter and occultist, Denis Forkas (denisforkas.com). The paint used included some of Nergal‘s own blood! Additional art and design was completed by Metastazis (PARADISE LOST, etc.) and Zbigniew Bielak (WATAIN, GHOST).

Hot News: Behemoth – unveils new video: the making of “The Satanist” part 3 of 4

Hot News: Behemoth – unveils new video: the making of »The Satanist« part 2 of 4

Hot News: Behemoth – unveils new video: the making of “The Satanist” part 1 of 4

Hot News: Behemoth – to tour the pacific rim in October