Death Metal Chuggers RESISTANCE have announced the artwork and title of their forthcoming fifth studio album. Titled, The Seeds Within, the album will be released later this year under a label to be announced.

The band has posted a studio trailer for The Seeds Within at this location.

Guitarist Oli Dris commented about the album: “The CD elaborates the human race and its defects. How we desperately seek forgiveness, how coward we are towards our reality. The lyrical content is heavy and depressive. It metaphorically pictures how helpless we are facing whatever comes at us. The music is structured and shaped around this concept. Rhythm is the essence but melody plays its part bringing freshness when needed and making the listener’s journey flawless. More brutal, more aggressive and heavier than ever, Resistance matured and will crush!”

The Seeds Within line up. 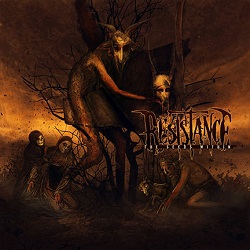 In other news, RESISTANCE has announced a nine-date UK tour, which kicks off on April 18 in Stoke. Dates are as follows:

Check out the official video for “Hordes of the Damned” taken from the band’s 2012 release, To Judge and Enslave at this location.