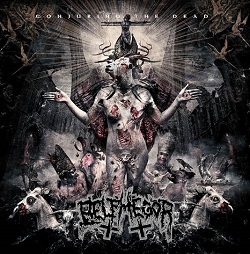 The track list for the new album reads as follows:

‘CONJURING THE DEAD’ was recorded at Mana Studios in Florida under the direction of Eric Rutan. Three and a half years have past since the highly praised album ‘Blood Magick Necromance’ was released. BELPHEGOR are back to conquer – possessed, on fire and stronger than ever!

The artwork was created by Greek artist, Seth Siro Anton who also painted the cover of ‘Pestapokalypse IV’ in 2006.

You can pre-order here: http://media.nuclearblast.de/shoplanding/2014/belphegor/belphegor-conjuring-the-dead.html

‘CONJURING THE DEAD’ will be unleashed on August 8th (EU/ North America) and August 11th (UK/FR) via Nuclear Blast.