Get This Right Records is preparing to release a bulldozing split between two heavy-hitters in the contemporary hardcore circuit; a brutal showdown between Pennsylvania’s BENCHPRESS and Puerto Rico’s MARTYR’S TONGUE.

Based out of Lewistown, Pennsylvania, BENCHPRESS formed in 2011 initially as a joke, the goal being to write beatdown anthems for gym-rats. Having developed into the metal-tinged, hard-hitting powerhouse the band is nowadays is the product of several lineup, influence and outlook changes over recent years, and with two EPs and a prior split under their belt, the quintet’s future appears to be nothing but promising. BENCHPRESS‘ venomous surge of hardcore in the realm of veterans Cold As Life and Merauder and on par with modern acts Suburban Scum, Empire of Rats and Harm’s Way, is displayed through two tracks on side A of this new split, “Penance” and “Pissed Away,” recorded, produced and mastered by Carson Slovak at Atrium Audio in Lancaster, Pennsylvania.

San Juan, Puerto Rico-based MARTYR’S TONGUE lays down a landslide of pandemonium as corrosive as it is pulverizing. With several demos, splits and EPs released since 2001, the self-proclaimed “five audio terrorists preaching world genocide through sonic warfare” unleash a brand of metallic mayhem born of the dark lords of Cleveland, Ringworm and Integrity, contemporized with more harsh noise, grime and electronic elements, putting them in the race with Rot In Hell, Full of Hell, Blind To Faith and the like. Their two anthems, “Deconstructive Process” and “Unholy Communion,” were mastered by Axel in San Juan, mercilessly overthrowing the B-side of this split platter.

Pennsylvania-based Get This Right Records — responsible for prior releases from Daylight, Full Of Hell, Goldust, Bottomfeeder, Crucified and others — will put the BENCHPRESS/MARTYR’S TONGUE split out on May 8th. The release will be available via digital download as well as 7″ vinyl in a variety of color schemes and numbers, all including a digital download code. 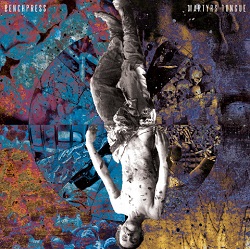 Hot News: Benchpress – Throw Down To A Track From Split 7-Inch With Martyr’s Tongue At Revolver