Featuring two tracks, the brand new title track and a re-recorded version of “Demonsword Infernal,” which appeared on the 2006 demo. The Demon And The Tree Of The Dead, Lamiais band’s first offering since 2012’s “Dreaming Death EP.

Lamia is now streaming at: lavadome.bandcamp.com/album/lamia.

Vocalist/guitarist Doomsayer comments on the release:
“Lamia is a conscious return to the older, chaotic BMD stylings more prominent in the earlier demos and on debut album From Hell. Whilst Dreaming Death was quite a change in atmosphere from our previous works, it was never our intention to distance ourselves from the more intense and involved aspects of our earlier material, and so with Lamia and in the coming material that will follow, you will see more of a blend of the two.” 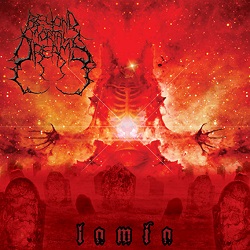 Lamia was unleashed upon mankind on March 14 as a result of a cooperation between Czech Republic’s Lavadome Productions and German label Unholy Prophecies. The limited-editon (300 copies), transparent red vinyl and is available at:
store.lavadome.org
shop.unholyprophecies.com

Digital copies can be purchased at iTunes, Amazon, Spotify and other digital retailers or directly from the BEYOND MORTAL DREAMS Bandcamp page at: beyondmortaldreams.bandcamp.com

2014 marks BEYOND MORTAL DREAMS‘ return to active live duties! The band’s first show in seven years will take place this summer at the Black Conjuration Fest in Adelaide, South Australia. Set for June 6 – 7, the fest will be headlined by Revenge and Coroner. For details, visit www.facebook.com/BlackConjuration.